The trail system at Cooley-Jericho Community Forest consists of three trails—the Blue Loop, the Yellow Trail, and the Red Trail. All three trails are blazed in their respective colors with directional signs installed at major junctions. There are also two unblazed approaches to the Forest from the west that follow snowmobile trails. In addition to the Trail Finder map, a map showing the three trails, as well as the two western approaches to the Forest, can be found on the Ammonoosuc Conservation Trust website.

The trails at Cooley-Jericho Community Forest are multi-use and are used by hikers, mountain bikers, snowshoers, and backcountry skiers. Portions of the Blue Loop and the Red Trail are also used by snowmobilers.

The Blue Loop starts at the Trumpet Round Road kiosk and is just under 3 miles long with an elevation gain of about 900 feet. Although this description ascends the trail via the southern side of the loop and descends via the northern side, the trail can be hiked in either direction.

Leaving the kiosk, head south across the clearing and enter the woods. The trail soon crosses Salmon Hole Brook and begins to steadily ascend Cole Hill through a young forest. En route, you will pass a backcountry ski trail on your right; make sure you bear left here to stay on the Blue Loop. Just over half a mile from the trailhead, you reach the lower ledge that has a beautiful view to the north and east. The Blue Loop then continues to ascend, passes a junction with the Yellow Trail (with which it now coincides), and reaches the upper ledge. Here there is a sweeping view that extends from northeastern Vermont to Mount Lafayette and the Kinsmans—a great spot for a snack or lunch. Leaving the ledge, the Blue Loop soon reaches a second junction where the Yellow Trail heads south to Cooley Hill and the Blue Loop turns right. (NOTE: A backcountry ski trail also comes into this junction; make sure you take a sharp right to stay on the Blue Loop).

Climbing moderately, you pass several limited views to the north and soon reach the junction with the Red Trail, about 1.3 miles from the trailhead. Turn right to continue on the Blue Loop. For the next half mile, the trail is marked with blue stakes and follows a snowmobile trail, descending steadily to the northwest with views towards Vermont. Care should be taken on this portion of the trail as the surface is sometimes rough with no distinct footbed. Eventually you will reach a post with trail signs on your right; turn right here and head easterly down the northern side of the Blue Loop. The trailhead is about 1 mile from this junction.

For a short distance the trail is fairly level and then begins to descend moderately to the northeast, switching back and forth across several old logging roads. Soon the grade lessens and you turn to the right, passing another junction with the Yellow Trail before crossing a long stretch of bog bridges. The trail enters a wooded area and then emerges on a broad ledge where there is a lovely view to the east. After enjoying the view, walk down the ledge and return to the kiosk where you started your hike.

The Yellow Trail starts at the Trumpet Round Road kiosk and runs 3.1 miles to the summit of Cooley Hill with an elevation gain of about 1000 feet. It is both a hiking trail and a mountain bike trail, so hikers may occasionally encounter mountain bikers using the trail. For hikers, the Yellow Trail is less steep than the southern side of the Blue Loop and is a good option for someone seeking a more gradual approach to the view ledges on the Blue Loop.

Leaving the kiosk, head up the large ledge on the west side of the clearing. Enjoy the view from the top of the ledge and then bear right for the Yellow Trail. The trail winds through the woods and soon reaches a junction with the Blue Loop. Continuing straight on the Yellow Trail, you gradually ascend the northern side of Cole Hill through a young forest, with several switchbacks to lessen the grade. Just over a mile from the trailhead, you reach another junction with the Blue Loop.

If you are just hiking to the view ledges, the lower ledge is about 0.2 miles to the left heading down the Blue Loop and the upper ledge is a short distance to the right of the junction. Both ledges provide beautiful views and are a nice destination for a moderate day hike. If you choose this option, you can descend back to the trailhead via the Blue Loop or return via the Yellow Trail.

The Yellow Trail now traverses the eastern side of Cole Hill through an attractive forest with some ups and downs in the trail and several crossings of the backcountry ski trails. Just over half a mile from the last junction with the Blue Loop, the Red Trail heads off to the right to the summit of Cole Hill and the Yellow Trail crosses into the White Mountain National Forest. Winding along the ridge between Cole Hill and Cooley Hill, the trail passes through a beautiful fern glade and then crosses back into the Community Forest. You soon enter an open area that was extensively logged in the past—use care here as the trail, although blazed, can be a bit difficult to follow at times. Leaving the open area, the trail turns left and begins to ascend the summit of Cooley Hill. As it nears the summit, the trail ends at the White Mountain National Forest boundary and meets the Jericho Road Trail, which ascends Cooley Hill from NH Route 116. Proceed a short distance on this trail, passing a snowmobile trail on your right, to the site of the Cooley Hill fire tower. The remains of the fire tower can be seen to the left of the trail. Built in 1939 by the Civilian Conservation Corps, it was a 40-foot wooden tower that was used for about 10 years and then removed.

When you are ready to return to the Trumpet Round Road kiosk, you can retrace your steps and hike the Yellow Trail all the way back or, if you like, descend on the Yellow Trail to the second junction with the Blue Loop (just past the upper view ledge) and then head easterly down the southern side of the Blue Loop.

Starting from the junction with the Yellow Trail, the Red Trail winds north through a spruce-fir forest for 0.4 miles towards the summit. The trail corridor is often not very obvious, so take care to follow the red blazes. As you approach the summit, you pass a spur trail on your right to a view, enter an open area, and soon reach a ledge. The actual summit of Cole Hill (2645 feet) is a short distance off the trail.

The trail crosses the summit area, bears to the right, and then descends along an old logging road. About 0.2 miles from the summit, the trail swings to the left and soon reaches the junction with the Blue Loop with nice views to the northwest. (NOTE: If you are hiking the Red Trail in reverse from the Blue Loop to the Yellow Trail, make sure to bear right about 0.1 miles after you leave the Blue Loop junction).

As shown on the Trail Finder map and on the Cooley-Jericho Community Forest map on the Ammonoosuc Conservation Trust website, there are two western approaches to the Forest which follow snowmobile trails. They are mostly on private land, may be overgrown at times, and are not blazed, signed, or maintained like the three trails described above. Hikers should be aware of these limitations and use care if they decide to access the Forest via one of these routes.

The approach to the Forest shown on the maps as the “Dyke Road Access Trail” can be reached from the Class VI road that runs between Jim Noyes Hill Road in Landaff and Dyke Road in Sugar Hill. From the Class VI road, you ascend a snowmobile trail for just over a mile to the Community Forest boundary and the junction with the northern side of the Blue Loop.

The approach to the Forest shown on the maps as the “Merrill Mt. Road to Cooley Hill Trail” can be reached from the end of Merrill Mountain Road in Landaff. From this point, you follow a snowmobile trail for just over 2 miles to the summit of Cooley Hill, crossing the Community Forest boundary en route.

Spanning 840 acres in the northwest corner of Easton, the Cooley-Jericho Community Forest was created in 2013 to protect a large tract of upland forest on the ridgelines of Cole Hill and Cooley Hill. Four communities—Easton, Franconia, Landaff, and Sugar Hill—were involved in the creation of the Community Forest, which is now owned and managed by the Ammonoosuc Conservation Trust on behalf of the 4 participating towns. Permanently protected for all to enjoy, the property is open for many forms of recreation including hiking, mountain biking, snowshoeing and skiing, hunting, and wildlife observation.

Logged extensively in the past, the Forest is now regenerating and provides prime wildlife habitat. Black bear, moose, white-tailed deer, turkey, and bobcat have been documented on the property. There is also the possibility that American marten and Canada lynx may be found in the Forest. Bird observations at Cooley-Jericho have included Canada warbler, ruffed grouse, olive-sided flycatcher, scarlet tanager, northern flicker, ovenbird, white-throated sparrow, wood thrush, American woodcock, and chestnut-sided warbler.

The name of the Forest reflects the local history of the area. The Cooley family lived and farmed in Sugar Hill for many years; Jericho was a logging community in a remote section of Landaff.

The Cooley-Jericho Community Forest is owned and managed by the Ammonoosuc Conservation Trust (ACT), the non-profit land conservancy serving New Hampshire’s North Country. ACT conserves land with ecological, community, historic, or scenic value, focusing especially on farmlands and working forests that are the foundation of the region’s economy and character. For more information visit the Ammonoosuc Conservation Trust website.

Dispose of Waste Properly
Pack it in, pack it out. This goes for trash, leftover food, toilet paper, and hygiene products. If you brought it into nature, please bring it out.
Trail Map
Legend
Hide All
Highlight trail segments by permitted use(s).
Directions

Coming from the south, take Exit 38 off I-93 in Franconia. Turn left at the bottom of the ramp and then right onto Routes 116 and 18 north. Drive 0.5 miles through Franconia and turn left onto Route 117. Travel 3.2 miles on Route 117 to Sugar Hill and then turn left onto Pearl Lake Road. In 0.25 miles, turn left from Pearl Lake Road onto Hadley Road. Drive 1.7 miles on Hadley Road and turn left onto Dyke Road. In 0.2 miles, take your first right onto Jericho Road and then, in 0.3 miles, your first left onto Trumpet Round Road. The parking area for Cooley-Jericho Community Forest is located at the end of Trumpet Round Road. Follow the woods road at the southern end of the parking area for about 0.1 miles to the trailhead kiosk.

There are also access points to the Cooley-Jericho Community Forest from Dyke Road in Sugar Hill, Jim Noyes Hill Road or Merrill Mountain Road in Landaff, and the end of the Jericho Road Trail in Easton, but the best access to the Community Forest is from the parking area at the end of Trumpet Round Road. 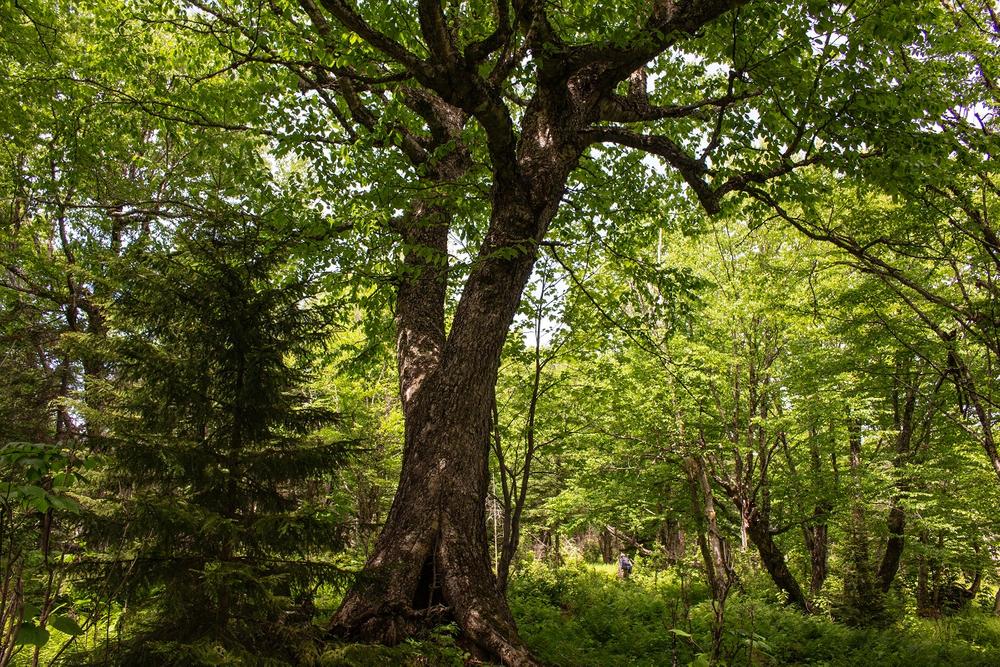 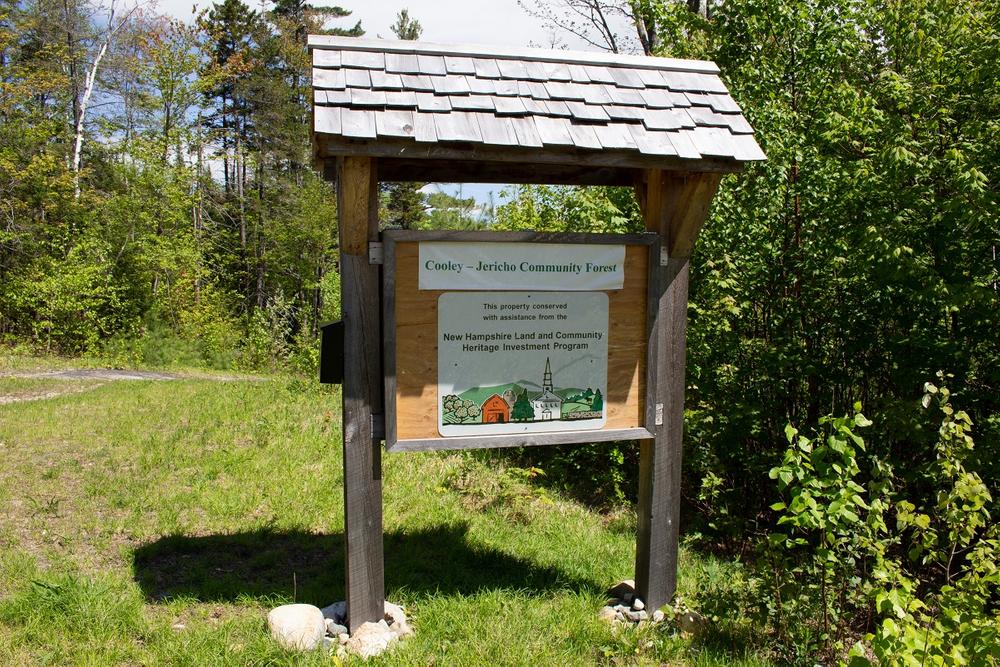 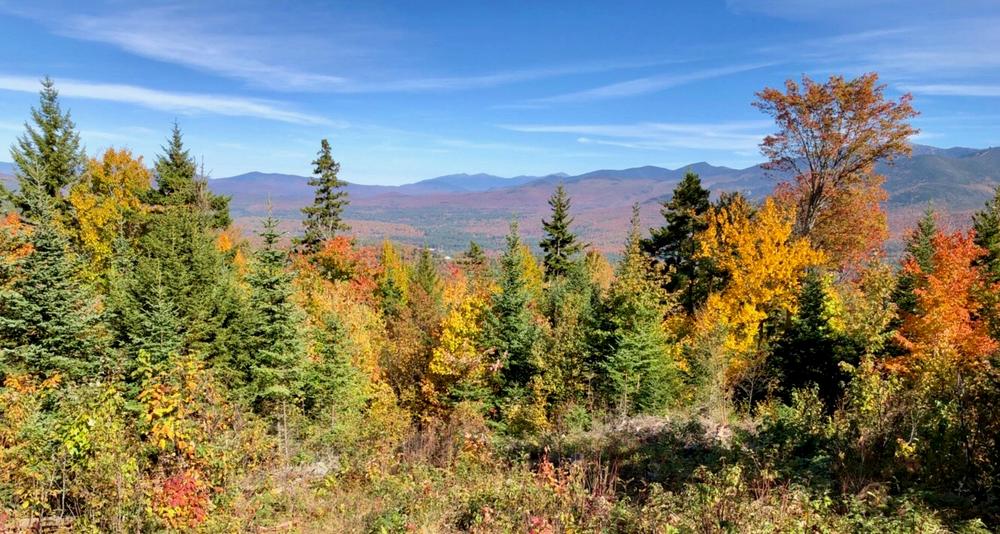 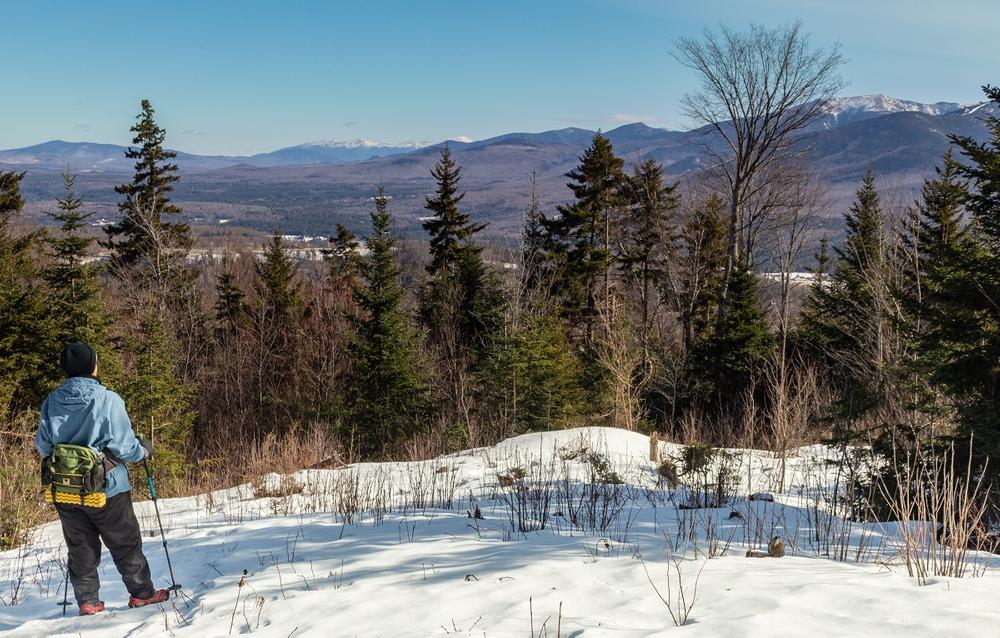 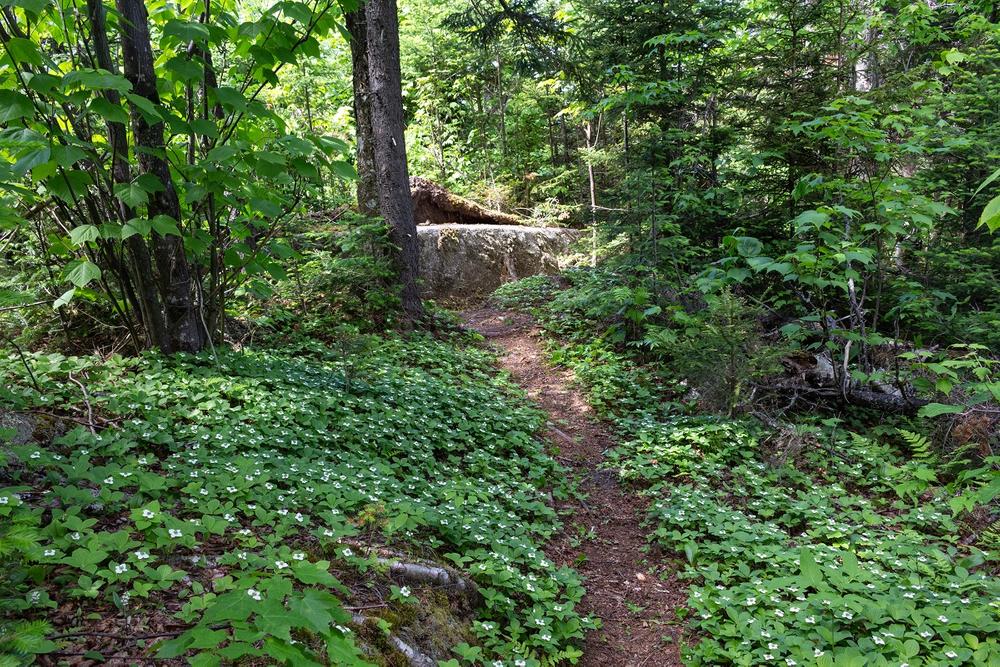 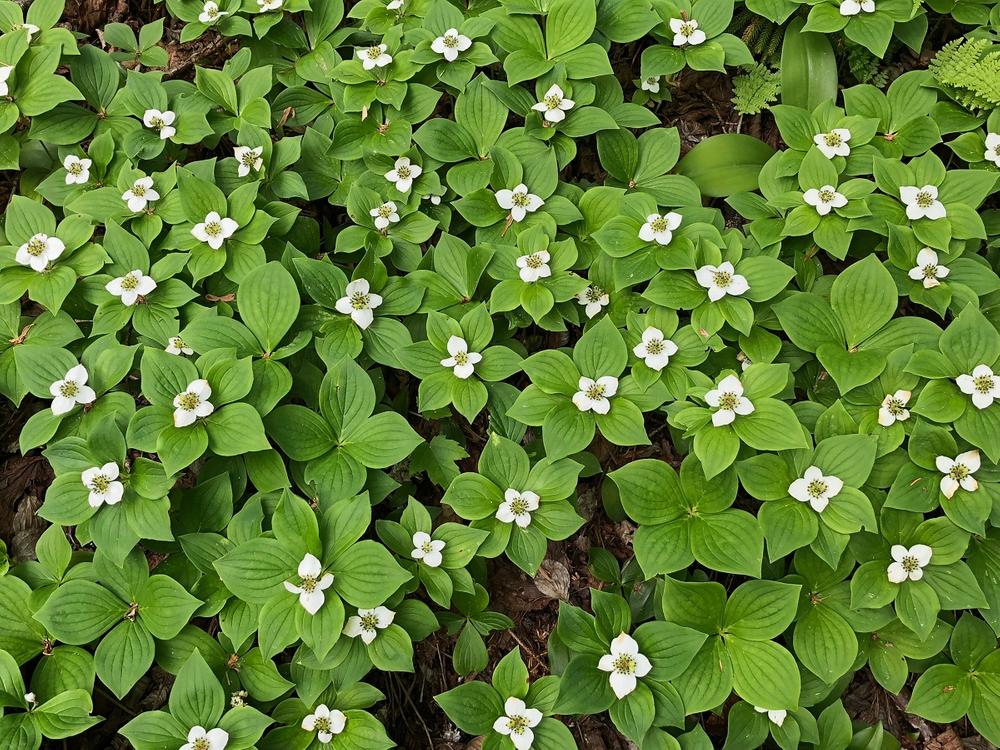 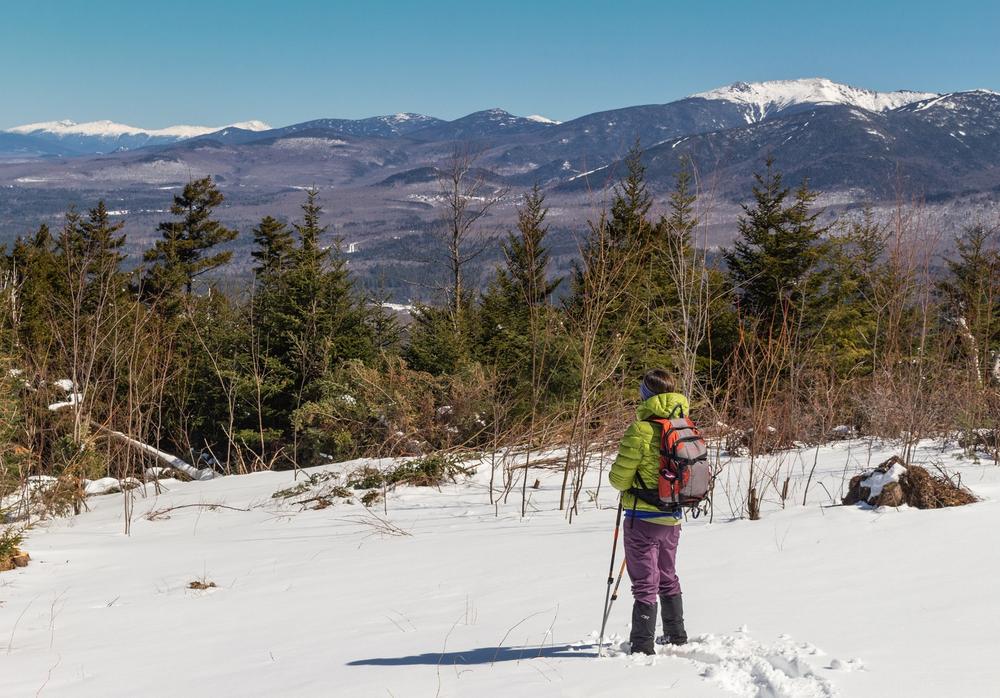 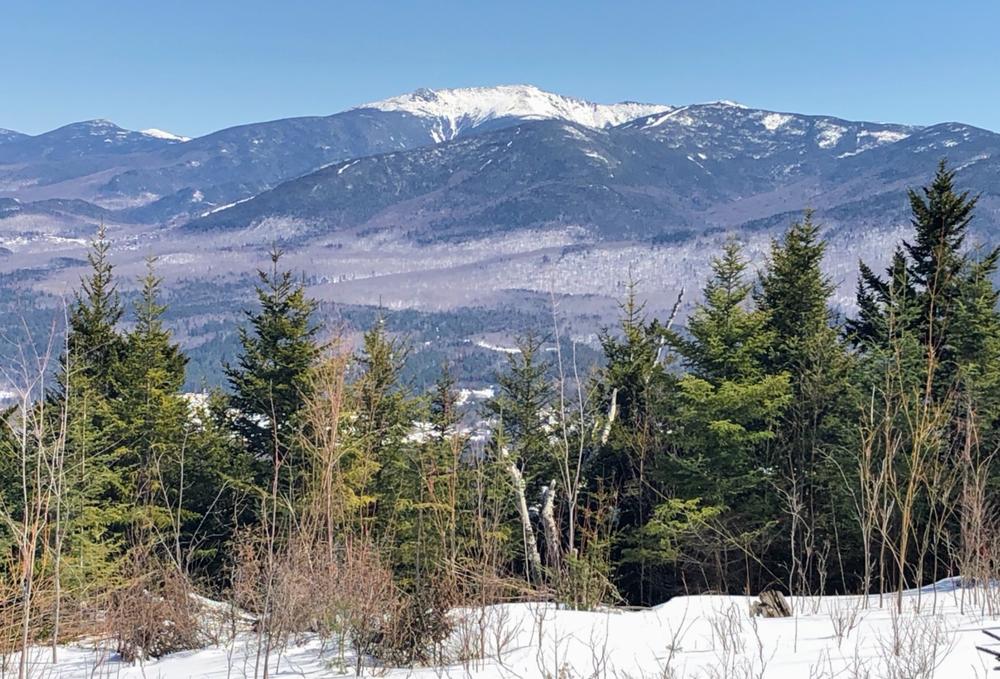 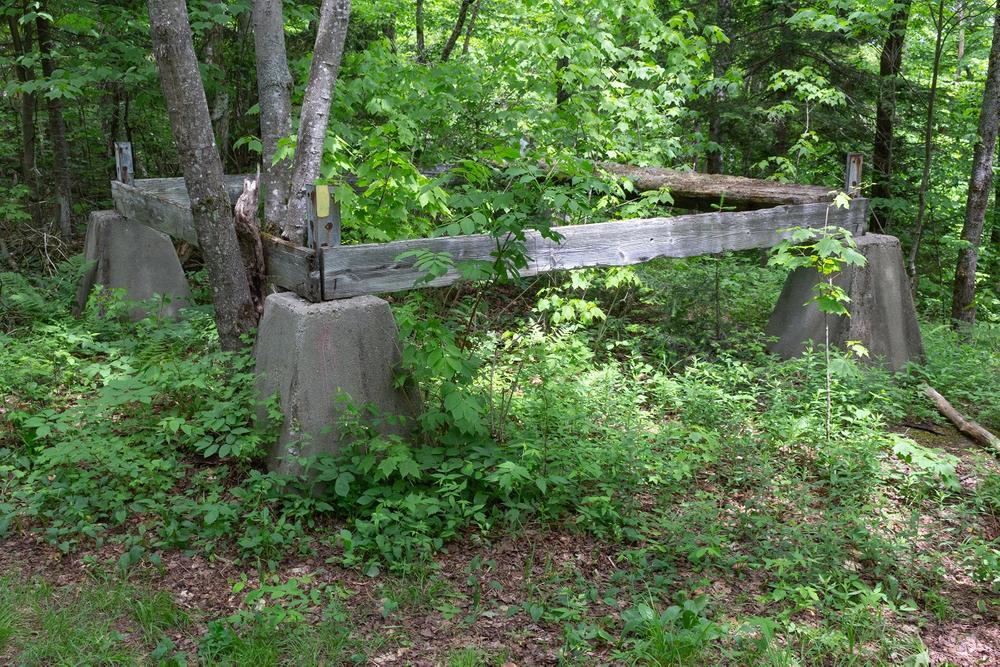 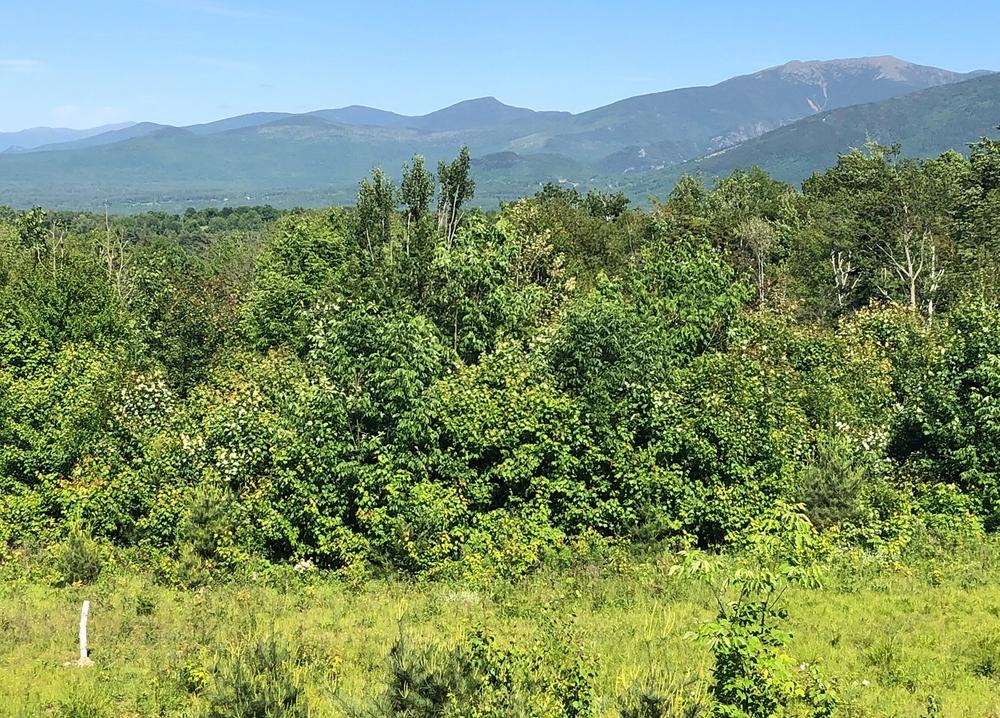 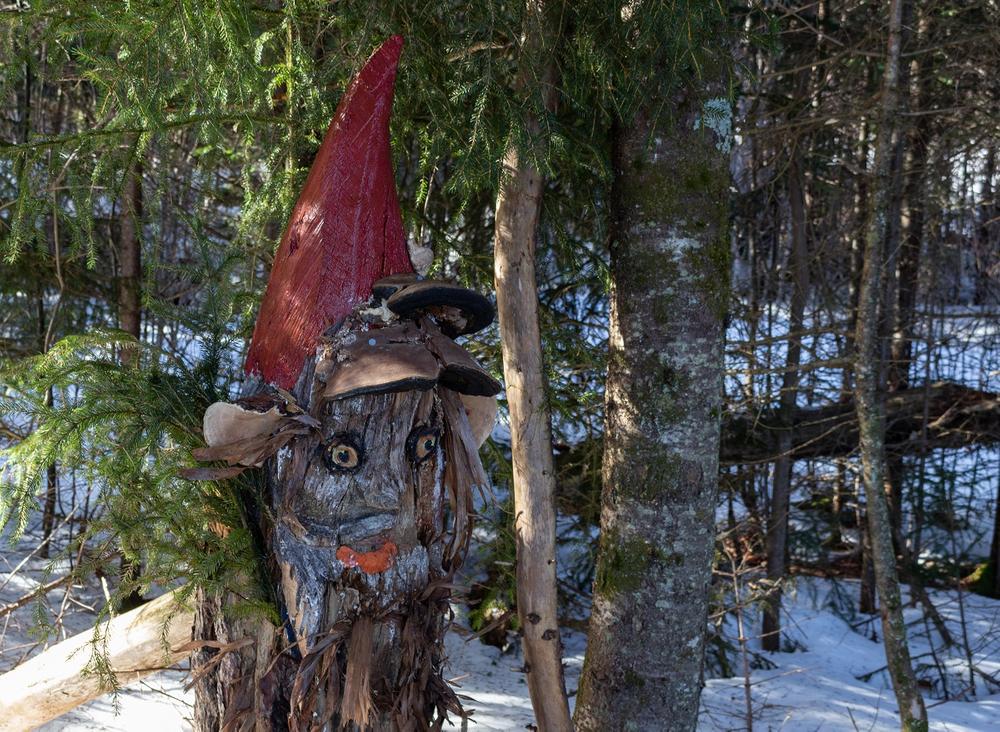